findings from Australia, New Zealand and the United Kingdom 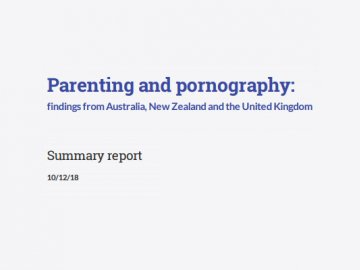 Exposure to pornography is recognised as a real risk for children online, ranking highly,alongside cyberbullying and contact with strangers.

Pornography can negatively impact a young person’s mental health and wellbeing andtheir knowledge, attitudes, beliefs and expectations about sex and gender.1 Exposure topornography has also been found to shape sexual practices and strengthen positiveattitudes toward sexual violence and aggression.2

While parents tend to underestimate the frequency of their children’s exposure to onlinerisks such as pornography3, they are also seen as an important source of support andcomfort for them.

Recognising the important role parents play in protecting their children from risks onlinesuch as exposure to pornography, the Office of the eSafety Commissioner in Australia,with Netsafe in New Zealand and the Safer Internet Centre with the University ofPlymouth in the United Kingdom (UK), collaborated on research that explores howparents think, and engage with this issue. This short report presents the findings of thisjoint research effort on parental attitudes to pornography. It also furthers thecollaboration between the agencies which began with the December 2017 release of thereport ‘Young people and sexting-attitudes and behaviours.’

In the past, the majority of international research focused on three points: children’saccess, exposure to, and views of pornography and how this can affect their sexualidentity development, sexual health, and mental health. Parents’ attitudes and viewsabout their children’s experiences around pornography had not been comprehensivelyreviewed.

This research report summarises results from the first cross-jurisdiction quantitativestudy focussing on parents in New Zealand, Australia and the United Kingdom.