What's in a meme? 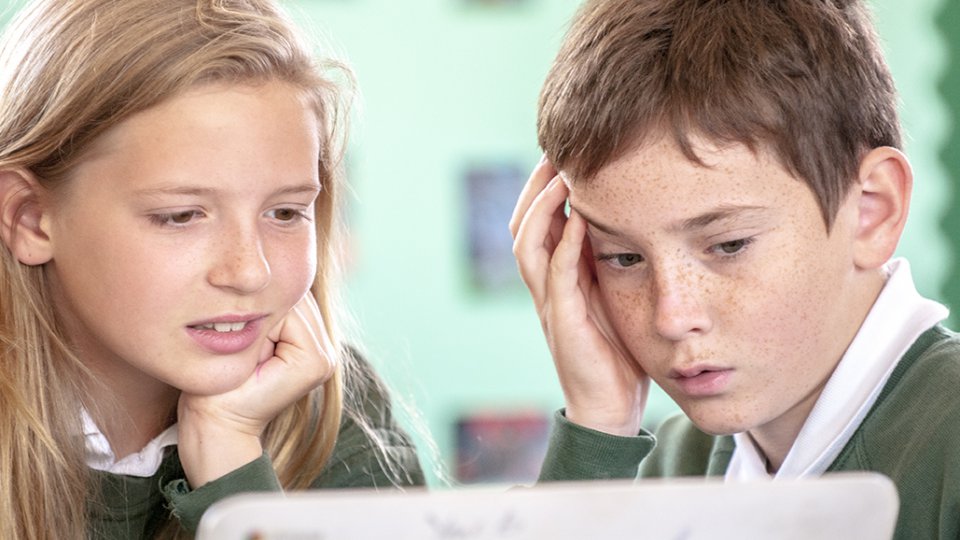 PLEASE NOTE: The following article covers sensitive subjects and uses some imagery and strong language that some readers may find offensive.

Critical thinking is a term we bandy around quite often in relation to education and young people.

Children need to be critical thinkers in this digital age of “fake news” and dubious content, but education only goes so far. We can talk about critical thinking until we’re blue in the face at school, if after all that they open Instagram to find five of the most famous celebs they follow have shared the same story, it would take an incredibly astute person to question it.

In the last few weeks there have been several stories of injustice spreading virally online, celebrities with millions of followers sharing and calling for action. I’m not going to explore the cases specifically because we just don’t know enough, but I do think it’s interesting to look at the reaction and consequent impact for the victim involved.

Cyntoia Brown is currently serving a life term in prison, the meme that captured the basic detail of her case and went viral looks like: 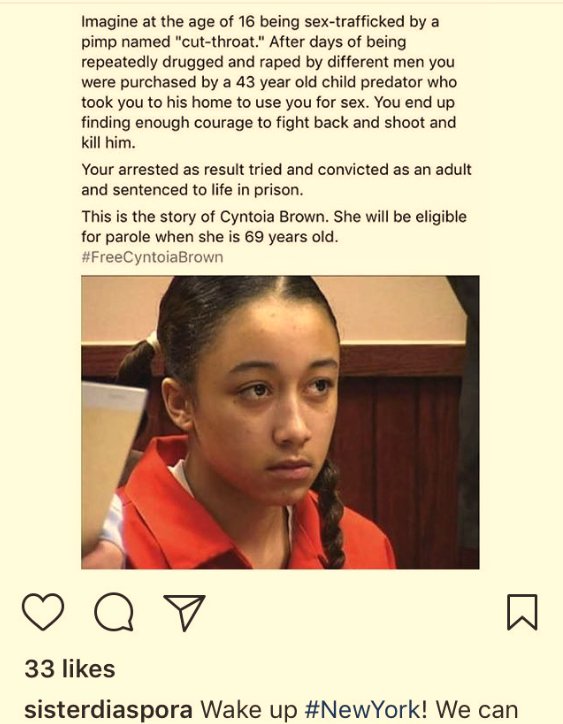 Cyntoia has been in prison since 2004* and this isn’t the first time her case has gone viral, it first appeared only a few years ago online with masses of people sharing the story. After this latest flurry of interest from the likes of Beyoncé Kim K and P Diddy, she is apparently getting help from Kim K’s own solicitor and if you believe the press “a lot is being done”. She is still in prison and there is no end to her sentence in sight. That is the fact.

If you Google the name, you will also find a lot of articles exploring the crime and the opposing side that she isn’t a victim. Either version of this story is tragic.
It’s kind of a god send that she doesn’t have social media access because I don’t know what would be more crushing; having your story reach social media with millions of people tweeting in support of you, all to be forgotten in a week. Or, to have exactly the same thing happen again a few years later and again not see any progress. 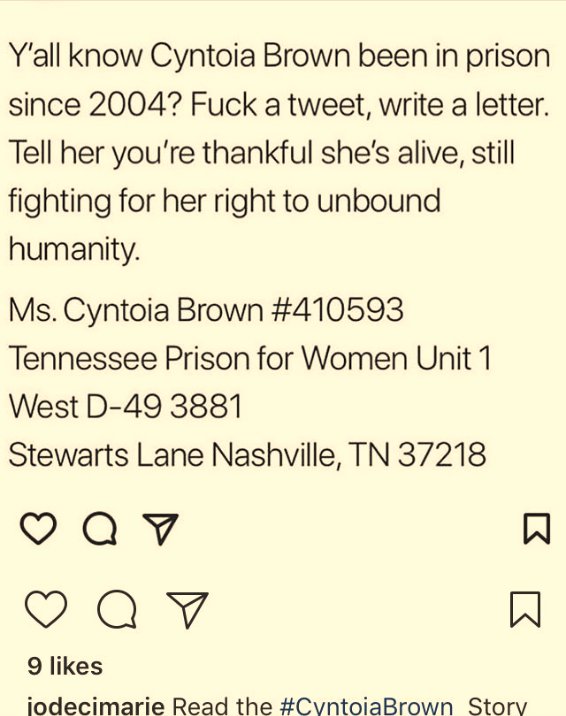 Awareness raising is important and the internet is great for that, but how much impact does it actually have?
Does anyone even remember what ALS is?

Keaton Jones. His mum filmed him talking in the car seemingly after finishing another day at school, pleading the bullies to stop and asking why people bully. The video is sad, anyone with a heart would feel compassion for Keaton. 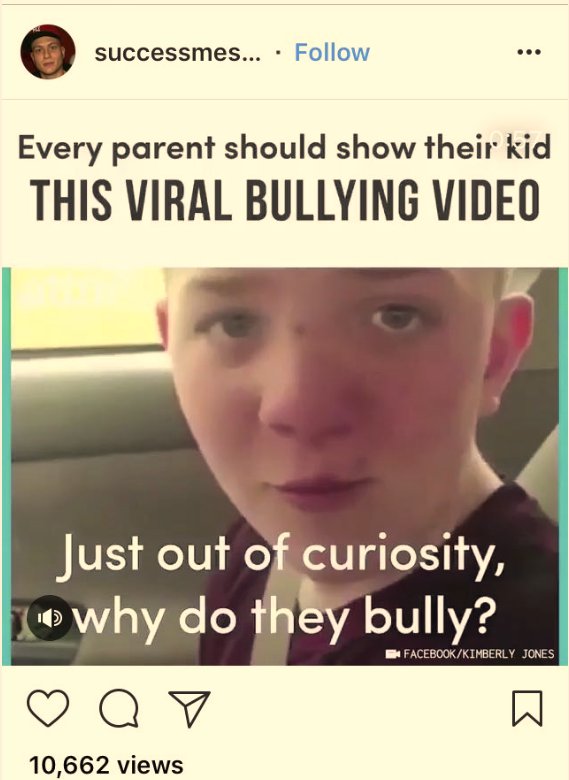 Within hours the video his mum uploaded was everywhere with celebrities again sharing the video and encouraging their followers to help fight bullying.

However it didn’t take long for someone to do some digging on the boy’s family. 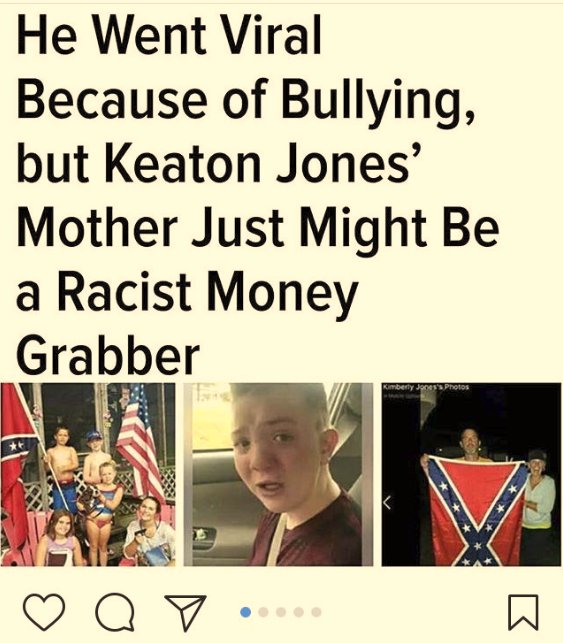 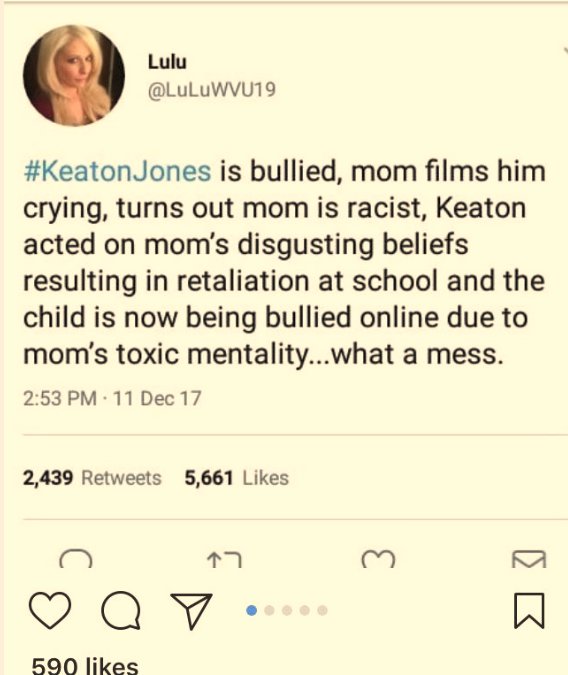 Whether this is true is again questionable.

A lot of those celebrities initially sharing the post have now removed his video. Rihanna (@Badgalriri) shared his video and sent sympathy. Since the news has come out about his family she has not only removed the post but replaced it with this: 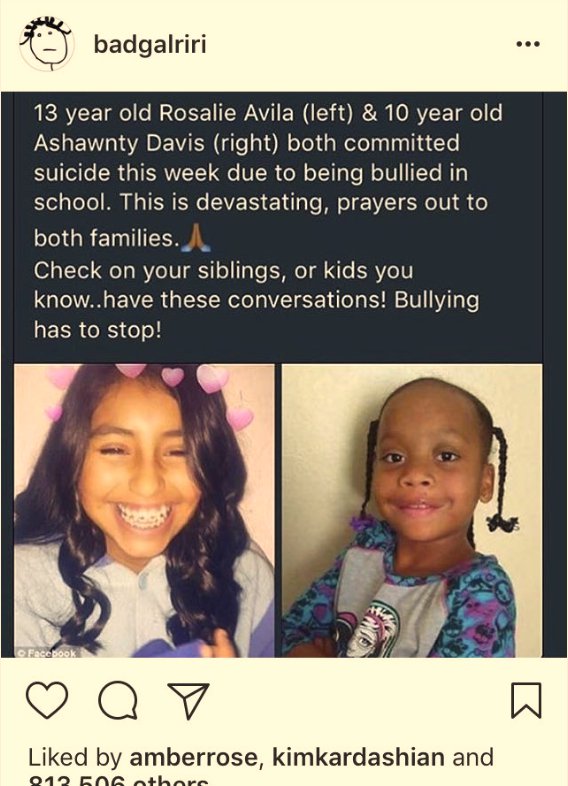 Whatever you may or may not know about this boy’s family, he is still the victim of bullying so if your cause is really to stop bullying , why does it matter where he comes from?

Is his victimisation and reality really any less important because of what his family believe?

As adults we need to role model the behaviour we would like to see in young people and actually in both these cases I think we could learn more from them. We have to train ourselves to think before reacting to our natural human instincts. They serve a purpose for sure, but especially in the online world, where we have the privilege of time to think about our instincts before acting on them, we need to take advantage of that. Strong emotions can skew our perception and drive us to take actions we may not do given a day or two to “cool down”.

Of course the natural reaction to either of these stories is to be shocked, outraged and maybe quite sad. But to share in someone’s distress, fight for their cause and reach out to then take that away later, or just forget about them altogether? Well, that’s just cruel.
I’m not for a minute saying not to get involved and fight for these causes online that you believe in but, just take a minute to think about the real life person at the end of the story and how your influence could impact their life.