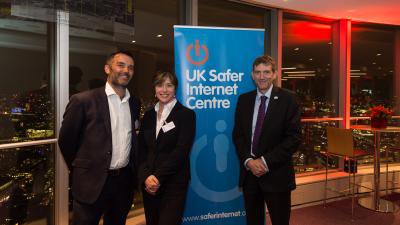 The UK Safer Internet Centre has been shortlisted for an ISPA award under the category Best Project or Partnership.

The UK Internet Service Providers Association (ISPA), which hosts the awards, has chosen the UK Safer Internet Centre as a worthy candidate for the Best Project or Partnership Award 2018, which is one of three new awards added for 2018.

The UK Safer Internet Centre is a partnership of three leading organisations: SWGfL, Childnet International, and Internet Watch Foundation, with one mission - to promote the safe and responsible use of technology for young people.

I am honoured that the UK Safer Internet Centre has been shortlisted for the project or partnership category in this year’s ISPA awards. This partnership of three leading charities allows us to help young people around the country to be safe online, as well as to help those who are supporting young people.

“Our work as the UK Safer Internet Centre grows each year, with Safer Internet Day 2018 engaging more supporters and reaching 45% of young people in the UK with real impact

UKSIC partner the IWF have also been nominated for the ISPA 20th Anniversary Award.

The IWF has been nominated for its work with the internet industry over the last 20 years and its success in keeping the UK internet clear of online child sexual abuse content. Less than 1% is now hosted in the UK compared with 18% when the UK was first set up in 1996.

I’m so proud that the IWF has been nominated to win an ISPA award. Our analysts are world class and have worked incredibly hard to remove child sexual abuse imagery from the internet over the past 20 years. To have this success recognised by the internet industry is something which means a great deal to the whole team.

Our work in the UK Safer Internet Centre is helping children across the country to stay safe on the internet, and the partnership with Childnet International and SWGfL has been fantastic. We’re thrilled to see the partnership be nominated for an award.

The finalists for 2018 will be scrutinised by an “independent panel of industry experts,” while broadband ISPs, website hosts and VoIP providers must undergo technical testing.

The winners will all be announced during an event held at the Midland Hotel in Manchester on the 12th July 2018.

To read more about the ISPA Awards, go to www.ispa.org.uk/ispa-awards