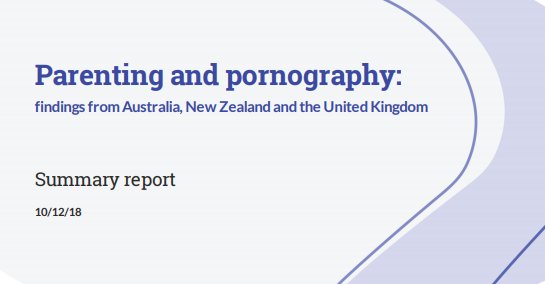 The most widely acknowledged concern among parents is exposure of their children to online pornography, according to collaborative research conducted with the University of Plymouth by South West Grid for Learning as part of its work within the UK Safer Internet Centre.

The large scale study, which included a UK-wide focus group, found that concern about exposure to pornography was one of the top three worries when parents were asked about their single biggest concern. This was well ahead of concern about mental health and self-esteem related issues. The study also found that parents, in general, feel confident that they would know how to deal with an issue related to their child seeing upsetting content online.

“It is clear from this research that parents across the world are concerned about content that their children encounter online. It is encouraging that parents in the UK appear confident in addressing these concerns and often obtain support from others. This comes at a time where there is much national attention on this issue, ahead of the introduction of age verification processes to access legal online pornography,” says David Wright, UK Safer Internet Centre and South West Grid for Learning Director.

The UK Safer Internet Centre study was part of international collaborative research with Australia’s eSafety Commissioner and Netsafe New Zealand. Findings were drawn from a survey conducted with Mumsnet involving 1,033 parents and grandparents, focus groups with 100 parents and a long-established South West Grid for Learning survey of 8,928 young people aged 7 to 18.

The survey also found that 42% of parents use network parental controls to tackle online safety in the home, with 62% of parents using physical monitoring and ‘house rules’ that impose limits on being online. Focus group discussions found that technological ‘solutions’ bolstered parental confidence, while other parents felt that reliance on technology was not always the best measure to protect their children.

Intrusive technology, including monitoring and tracking, was seen as eroding to parent-child trust, with a minority of parents convinced that surveillance is the best way to approach online safety.

The results highlight that parents in the UK, Australia and New Zealand have similar concerns when it comes to digital parenting.

The UK report will be published soon.