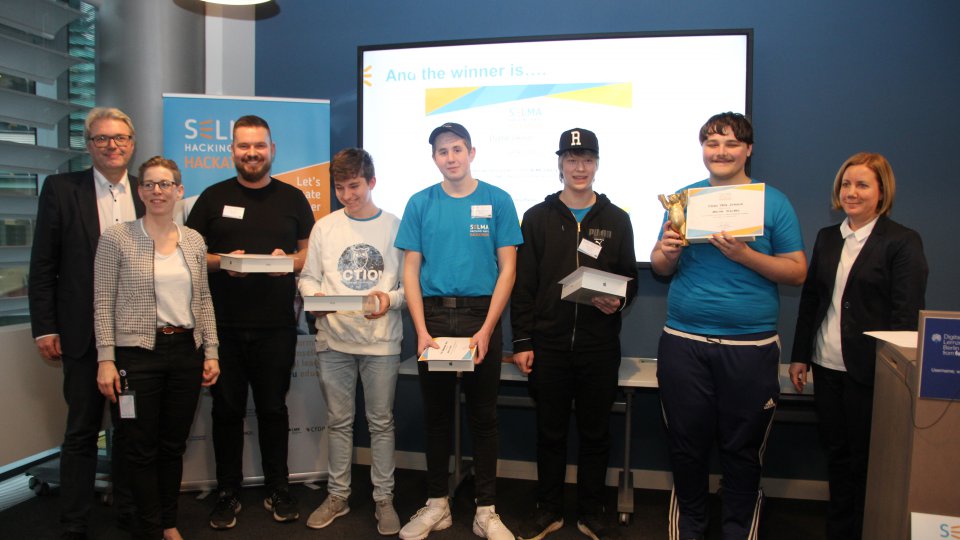 Berlin, 6 December 2018 – We are delighted to announce that Digital Vikings, a team of four teenagers from Denmark, just won the SELMA “Hacking Hate” hackathon! In the final phase of this competition, six teams came to the Facebook Digital Learning Centre in Berlin. For two days, they further developed the innovative (tech) tools and solutions to "hack" online hate speech they initially submitted. The winning idea is a fair game platform that will be linked to popular multiplayer games. The gamers with good online behaviour will get rewards in the game, those with bad behaviour will be punished and their comments will be silenced.

The jury awarded Digital Vikings’ idea based on its creativity, innovativeness, feasibility, and level of maturity. The fair game platform is a very innovative concept with great potential impact. “This idea tackles a very topical problem related to online gaming,” stated the spokesperson of the SELMA “Hacking Hate” hackathon jury, Petra Pfannes, during the award ceremony. “We like the idea that gamers get rewarded for good and positive behaviour. We also like that the team developed this idea based on their own personal gaming experiences. To us, it was clear that this is the right idea at the right time.”

Digital Vikings consists of Mike, Mads, Mani, Rasmus, and Thoke, as accompanying adult. They all come from Aarhus and they all are part of the gaming group of the Aarhus Youth centre. They received a golden Berlin bear trophy and an iPad for each team member so they can continue to hack the internet for good. Their idea will also be included in future SELMA project’s activities and outputs.

During the two-day hackathon, all participants had the opportunity to learn new skills and exchange their views and fresh ideas with young people from other European countries. They received input and feedback from inspiring experts in the field, which helped them to improve their ideas, and witnessed a theatre play about the impact of online hate speech and how people react to it. “We could choose only one winner, but coming to the hackathon clearly was a prize for all of them already. Dozens of teams submitted an application to participate in the hackathon but only six ideas were selected to participate in the final phase in Berlin”, mentioned the SELMA project manager, Hans Martens. “These days have not only been fruitful for the participating teams, but for all of us. Experts, jury members and SELMA partners have seen ideas with great potential that could be developed further. We also learned a lot about how young people would approach the problem of online hate speech. We will now try to integrate these ideas into our SELMA Toolkit” he added.

About the SELMA project

The hackathon has been organised by the SELMA (Social and Emotional Learning for Mutual Awareness) project, a two-year project co-funded by the European Commission which aims to tackle the problem of online hate speech by promoting mutual awareness, tolerance, and respect.

Building upon a Social and Emotional Learning (SEL) approach, SELMA empowers young people to become agents of change; it helps them to better understand the phenomenon of online hate; it provides them with tools and strategies to act and make a difference.

The main outcome of the project will be the SELMA Toolkit, a collection of principles, methods and practices that will enable different types of stakeholders to work on online hate speech with 11-to-16-year-old teenagers. It will be available in March 2019 and will approach online hate speech through a Social and Emotional Learning frame. It will include elements of media literacy, critical thinking and active citizenship in a digital world. Research activities on (online) hate speech carried out during the first months of the project will set an evidence base for its creation.