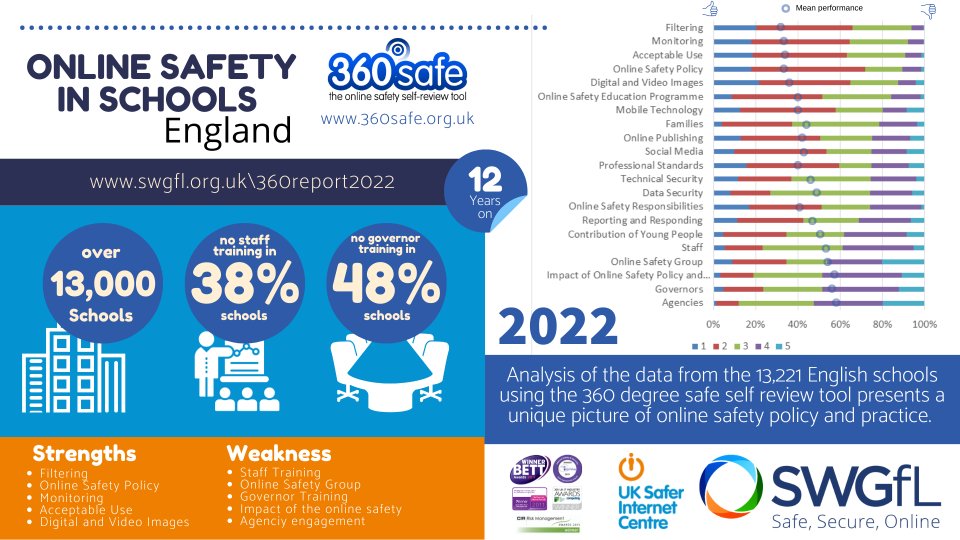 The annual Schools in England Online Safety Policy and Practice report for 2022 has been released. This extensive report looks at what the latest trends in online safety have been over the last year for schools in England. The report has taken data from the 360 Degree Safe tool which covers over 13,000 schools and colleges in England, and analyses what the strengths and weaknesses are when it comes to online safety practice and policy.

Professor Andy Phippen from Bournemouth University compiled the report, which is currently the 11th analysis to take place. It builds on over a decade of the 360 Degree Safe tool offering extensive support to thousands of schools throughout the nation in ensuring their online safety practice is meeting expected standards. As with previous reports, it offers valuable insight into where schools are showing considerable strength whilst highlighting particular areas of concern, but also supplemented with comparisons to both ProjectEVOLVE and Test Filtering data.

Findings from the report have shown that once again schools are continuing to show strengths around online safety policy and practice. Some of the findings conclude:

Aspects that have been shown to be a cause for concern are generally those that require more investment, or relate primarily to training across the school community. Some of the findings conclude:

As the report finds, schools cannot necessarily assume that, just because they have a strong filtering and monitoring strategy, they will not have to put other measures in place, such as training, education and awareness. These additional practices can work towards ensuring that they can mitigate the risks of their students accessing inappropriate or illegal material.

‘’The 360 report is an important insight into the current state of where online safety currently stands within education. It is encouraging to see that policy as well as filtering and monitoring continue to be seen as strong areas as well as the divide in findings between primary and secondary schools being significantly shortened.

Despite this, we are once again seeing training being highlighted as a cause for concern with the lack of training for governors being particularly alarming. Training is more than a box that needs to be ticked; it is an essential area to address! Without training, schools are just waiting for problems to arise, without knowledge and without confidence to respond. Online safety is needed more than ever and it is up to schools to ensure they are appropriately equipped.’’

360 degree safe was launched by SWGfL in November 2009 to support schools in evaluating their own online safety provision. It allows schools to benchmark that provision against others, identify and prioritise areas for improvement and find advice and support to move forward.