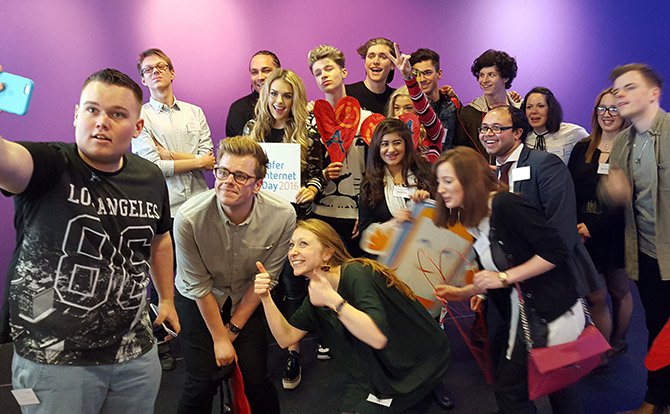 Along the way we have seen the day grow every year – from the number of organisations supporting the day to media coverage and the huge range of activities that take place throughout the country.

Safer Internet Day today is a global event – over 100 countries from the Insafe European network and all over the world – will celebrate the day today under the slogan ‘Play your part for a better internet’. In the UK we will be calling young people, government, policy makers and industry to each play a part in making the internet better and kinder. Our messages this year will focus on raising awareness of online hate and promoting tolerance and diversity on the internet.

What are the Safer Internet Day Team up to today?

The team at SWGfL have been heavily involved in the campaign from its start and will be in all corners of the UK today to promote Safer Internet Day and represent the UK Safer Internet Centre.

We produced SID TV – which this year is part of the Education packs for schools – a collection of short films promoting kindness and tolerance online for all younger children 3-11 year olds, and for young people aged 11-18.

Harvey Cantwell from CBBC’s Friday Download being filmed for SIDTV

We will be in Scotland at two main events – in the morning an event at Craigmount High School in Edinburgh organised by Scottish Government and in the afternoon at a Microsoft event.

In Wales our teams will be leading two major events at the schools, winners of the Safer Internet Day app competition. Cornist Park school in Flintshire winners in the Primary category, will share the Safe eExplorers app created by Georgia and Lilli and available now on the Google Play store in English and Welsh.

Ysgol Y Preseli , in Pembrokeshire, will host our second Welsh event – as winners in the Secondary category. Sam and the team of Digital Leaders there created the bilingual app My Username Generator which is now available on both the Apple and Google app stores.

In Northern Ireland we will be attending the main Safer Internet Day event attended by government ministers.

The team will also be at 3 big events in England. Liverpool and Everton Football Clubs are both hosting Safer Internet Day events attended by a large number of local schools who will engage in our activities.

In London we will be taking a group of young people to Number 10 Downing Street before hosting an event at the BT Centre in London to hear young people’s perspectives. Prominent speakers include Baroness Shields (Minister for Internet Safety and Security) and Edward Timpson MP (Children’s Minister).

At the event, the UK Safer Internet Centre and Instagram will be hosting an InstaMeet with popular vloggers and ambassadors from The Diana Award Anti-Bullying Campaign, capturing photography with creative heart-shaped props as part of the #shareaheart social media activity. Notable young talent supporting the day includes CBBC Presenters and pop stars Molly Rainford and Harvey Cantwell. Our team will be at the event, broadcasting from the event via Periscope and behind the scenes managing the social media feeds.

In the evening our experts from the Professionals Online Safety Helpline will lead a live Q&A to answer questions around online safety from everyone. So if you have a question about bullying, sexting, online reputation, and more, then tune into our Twitter @UK_SIC to follow the Q&A and send your questions using #SID2016

So from all of us here at the SWGfL team who are working on the campaign, have a fantastic Safer Internet Day!